Detail from: Nicola Sacco and Bartolomeo Vanzetti typed letter signed to the Delegates to the United Mine Workers Convention, Indianapolis, Ind., [Boston], 20 September 1921
View All Items
or
Spanning the years 1914–1967, the Aldino Felicani Collection: Sacco-Vanzetti Defense Committee Records documents the efforts and activities of the Sacco-Vanzetti Defense Committee to free Nicola Sacco and Bartolomeo Vanzetti from prison for the murders of Frederick Parmenter and Alessandro Berardelli on April 15, 1920, in Braintree, Massachusetts.

On the day after the arrest of Sacco and Vanzetti, Aldino Felicani, a personal friend, established the Sacco-Vanzetti Defense Committee. The collection documents the committee's propaganda campaign, defense attorney Frederick Moore's investigation and defense strategies, post-trial proceedings, and the execution of the two men. The efforts, financial and otherwise, made by labor unions, defense organizations, and individuals on behalf of Sacco and Vanzetti are also documented, as are the roles of Elizabeth Glendower Evans, Mary Donovan, and Elizabeth Gurley Flynn in the defense and the creation of the Sacco and Vanzetti Memorial. In addition, Sacco and Vanzetti's thoughts regarding the guilty verdict and their impending execution are documented through their correspondence. Also found in the collection are broadsides, the armbands mourners wore at the funeral procession, photographs, death masks, and Sacco and Vanzetti's comingled ashes.

Nicola Sacco and Bartolomeo Vanzetti were Italian immigrants and anarchists who were arrested and convicted of murder during the Red Scare, a time when foreigners were looked on with hostility and suspicion. Thus, this collection not only documents the efforts of the defense committee, it also documents such subjects as anarchy and anarchists, Italian immigrant radicalism, and political activism, in addition to the legal and social aspects of the case. 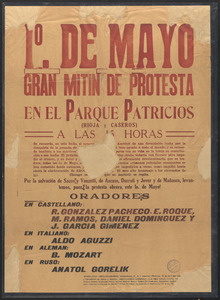