Mural Cycles at the Central Library in Copley Square

Detail from: III. The Arthurian Round Table and the fable of the Seat Perilous
View All Items
or
The Boston Public Library's 1895 McKim Building houses art and architecture treasures contributed by renowned painters, sculptors, and craftsman of the 19th and 20th centuries. Among the masterpieces at the Central Library are three major mural cycles: Edwin Austin Abbey's depiction of Sir Galahad's Quest for the Holy Grail (installed 1902), Pierre Puvis de Chavannes' Muses of Inspiration (installed 1895), and John Singer Sargent's Triumph of Religion (installed 1895-1919). All three artists conducted their library mural cycles in Europe; Abbey and Sargent shared a studio in England while completing their works, while Puvis painted his within his Paris studio. The works were shipped to Boston and adhered to the library walls using a technique known as marouflage.

Edwin Austin Abbey (1852-1911) was a young, highly regarded illustrator for Harper's Monthly magazine, but had never completed any work in oil paint when he was approached for the mural commission. The Philadelphia-born artist lived most of his life in England, where he befriended artist John Singer Sargent. In 1890, Abbey and Sargent dined with Charles Follen McKim, Stanford White, and Augustus Saint-Gaudens in New York, where architect McKim convinced him to consider painting a mural cycle in the Boston Public Library's Book Delivery Room. Upon visiting the library during its construction with McKim, Abbey agreed to undertake the project and signed a contract to complete the work for $15,000 in 1893. He selected a subject of "legendary romance" in The Quest for the Holy Grail, basing his work upon Alfred, Lord Tennyson's version of the Arthurian tale.

French artist Pierre Puvis de Chavannes (1824-1898) was regarded as one of the best muralists of the 19th century, with works installed at the Sorbonne, the Hotel de Ville, and the Pantheon in Paris. The Boston Public Library Trustees went against their original goal of highlighting American artists and craftsmen in the 1895 McKim Building, seeking the commission from Puvis given his high reputation. The Trustees contracted Puvis in May 1895, and a contract for the work was signed on July 7th of that year offering payment of 250,000 francs (approximately $50,000) over installments, a sum several times what Puvis had been paid for similar works. As the aging artist was reluctant to travel the great distance to Boston, library architect Charles Follen McKim sent him a sample of the yellow Siena marble used in the staircase area, along with photographs and precise dimensions of each panel enclosure. Puvis completed the works in his large studio in Neuilly, Paris, France, and after exhibiting the works in Paris shipped the panels to Boston for final installation in 1895-96 under the watch of the artist's assistants.

The long panel adjacent to Bates Hall depicts The Muses of Inspiration, while the panels surrounding the staircase depict "four great expressions of the human mind" in eight parts: Philosophy, Astronomy, History, Chemistry, Physics, Pastoral Poetry, Dramatic Poetry, and Epic Poetry. The installation of this, Puvis' only mural work outside of France, was completed in 1896.

John Singer Sargent (1856-1925) was born in Florence, Italy to an American family. He was educated at the École des Beaux-Arts in Paris, and spent most of his life living and working in England. The artist maintained close ties to Boston and painted the Boston Public Library murals concurrently with murals at the nearby Museum of Fine Arts. Known for his aptitude as a portrait painter, Sargent was commissioned to capture many famous faces of his day. The library murals -- arguably his most ambitious works -- represented an opportunity to solidify his reputation as a master. Distinctly different from his well-known portraits of distinguished Americans and Europeans and his delicate landscapes, Sargent painted in the style of Italian Renaissance frescos by incorporating the architectural detail of the building into the work.

He was not a highly religious man, but remained fascinated by religious imagery and iconography. "Triumph of Religion" represented an opportunity for the mid-career artist to take on a truly ambitious theme and celebrate his study of religious visual history. His mural cycle was left incomplete, perhaps slowed by the artist's personal loss with the death of his niece in World War I, as well as by criticism received from members of the public who found his representations offensive. 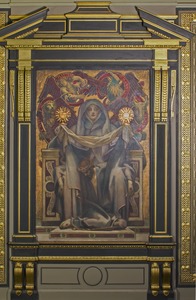