Detail from: Clementi XIII P M mvnificentissmo principi promotori bonarvm artivm
View All Items
or
Born in Mogliano Veneto, near Venice, Giovanni Battista Piranesi (1720-1778) was one of the most important Italian printmakers of the period and his views of Rome continue to define modern ideas of the ancient city. He began an apprenticeship in architecture and engineering with his uncle, who introduced him to his lifelong fascination with archaeology. In 1740, Piranesi moved to Rome to work as a draftsman and during this time began to learn the art of engraving and etching under Guiseppe Vasi (1710-1782). Vasi’s popular views (vedute) were eventually eclipsed by those of Piranesi.

Returning to Venice for four years in the 1740s, Piranesi is thought to have come under the influence of artist Giovanni Battista Tiepolo (1696-1770) and may have supported himself working as a scene painter. The influence of the theatrical Galli de Bibiena family and his days painting scenery are evident in his later work with the dramatic angles, perspectives, and shadows.

Upon his return to Rome, Piranesi opened his own studio in 1748 and began producing a series of vedute. He also pursued his archaeological interests, measuring and making detailed drawings of the ancient ruins that still lay exposed throughout the city, which eventually emerged in the publication of Le Antichità Romane de' tempo della prima Repubblica e dei primi imperatori ("Roman Antiquities of the Time of the First Republic and the First Emperors"). His prints proved enormously popular with wealthy collectors on their grand tours of Europe and are found in many important private and public collections. In addition to the famous views and antiquarian studies, he is well-known for his "Imaginary Prisons" series (Carceri d’invenzione), which was begun in 1745, published in 1750, and then republished in 1761 with considerable reworking.

His son Francesco and his daughter Laura both worked with him and, after his death, maintained the original plates. The twenty-nine volumes in Boston Public Library’s Antonio Cardinal Tosti Collection were assembled and published in Paris from 1835-1837. Some reworking is evident and prints created by Francesco were added to fill out some of the volumes. Some of the surviving original plates were continually used for making copies right up to the early 20th century, causing considerable difficulties for collectors and connoisseurs. While not the first state of the plates, the collection of the whole set is important for scholars, art historians, and collectors, who may wish to compare different states of the famous plates. For the general public, it is an exceptional opportunity to see in one place the astonishing range of this master craftsman at work. 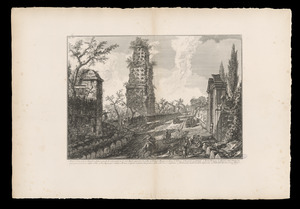 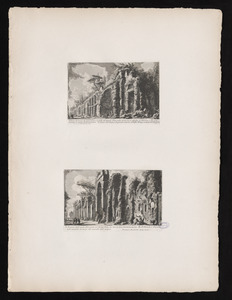 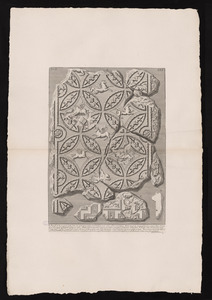 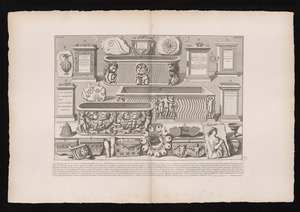