Detail from: Poems of nature [Front cover]
View All Items
or
Boston Public Library's collection of fine bookbindings includes examples from Europe, Asia, the Middle East, and the Americas during a time period that spans the 15th–20th centuries. The collection falls into three major categories. Bindings from the Medieval period to the first quarter of the 19th century are generally unique, having been handmade to order and reflecting the wealth and taste of the book's owner. The introduction of machine-made trade bindings in the 1830s led to rare and collectible bindings that reflected the artistic tastes and technical trends of the period, finally culminating in the beautifully designed and decorated publishers' bindings of the late 19th and early 20th centuries. The third category reflects modern owners' desire for individually designed and exquisitely bound books, usually from fine or limited editions. Examples include Art Nouveau and Art Deco bindings designed by Pablo Picasso, Paul Bonet, Pierre Legrain, and other important 20th century designers.

The earliest and latest bindings in the collection, nearly all of which are bound in leather and other treated skins, are entirely unique. Many of the texts were printed by important printers or contain illustrations by famous artists. Some of the bindings were created by important binders using a variety of materials, such as silver, ivory, or intricately joined pieces of different colored leathers, decorated with gold, silk, enamel, embroidery, or marbled papers. In addition, the collection includes nearly 200 examples of transitional and short-lived types of early publishers' bindings, such as pre-embossed and marbled cloth.

The works of Sarah Whitman, T. B. Hapgood, Amy M. Sacker, Marion L. Peabody, and Ethel Reed are well represented in the collection, as is the work of William A. Dwiggins, Bruce Rogers, the Boston publisher Copeland and Day, and the pioneering 19th-century Boston bookbinder Benjamin Bradley. 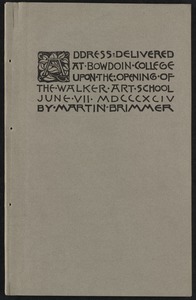