Detail from: A.A. McFadon autograph letter signed to Victoria Woodhull Martin, Omaha, March 1888
View All Items
or
Victoria C. (Victoria Claflin) Woodhull (1838-1927) was a campaigner for women’s rights and an advocate of sexual freedom. Woodhull was born Victoria Claflin in Homer, Licking County, Ohio in 1838. At the age of fifteen, she married Dr. Canning Woodhull and had two children, Byron and Zulu/Zula Maud. Woodhull divorced her husband in 1866. Later that year, she married James Harvey Blood. Two years later, the family, along with Victoria's sister, Tennessee Claflin, moved to New York City where the sisters became spiritual advisers to Cornelius Vanderbilt who financed Victoria and Tennessee's business ventures on Wall Street.

The sisters started their own brokerage firm, Woodhull, Claflin & Company, in 1870. In addition to their financial business, they started Woodhull and Claflin's Weekly, a newspaper that promoted women's suffrage and labor reform. In 1872, Woodhull was nominated for President of the United States by the Equal Rights Party, making her the first woman to run for the Presidency. Also, in 1872, she published an issue of Woodhull and Claflin's Weekly that exposed the sexual scandals of Reverend Henry Ward Beecher and stockbroker Luther Challis. Consequently, the women were arrested and tried for sending obscene information through the mail, causing Woodhull to spend election night in jail. She eventually divorced Blood and in 1877 and sailed to England with her children and her sister.

In England, Woodhull married her third husband, banker John Biddulph Martin (1841-1897), who she met at her lecture “The Human Body, the Temple of God.” Because of their involvement in different organizations and Martin’s work and family obligations, the couple did not often live together. As a result, they relied on correspondence to sustain their companionship.

This collection is mostly composed of letters dating from 1883-1927 that document the relationship between Woodhull and Martin. Through clippings, manuscript fragments, drafts, and Zula Martin’s notes of her attempted biography of her mother, the collection also documents Woodhull’s lifelong interests in equal rights, women’s issues, and marriage and divorce.

The correspondence from Victoria Woodhull Martin to John Martin contains many recurrent themes, such as her emotional and physical well-being, daily activities and social engagements, work on The Humanitarian, and her affection for her husband. The majority John Martin’s correspondence to his wife recounts his daily routine in Tewkesbury, news of his parents and other family members, and his love for her. The remainder of Martin’s correspondence is made up of letters to his parents. In the letters to his father, Robert Martin, the main focus is on financial and business matters. There are also letters from the associations with which he was involved.

The collection also includes correspondence from Woodhull’s admirers, members of professional organizations, and colleagues expressing their condolences over John Martin’s death. Some correspondents comment on her work in various publications and request copies of articles, portraits, photographs, or speeches. In addition, there are letters from Woodhull’s friends and family members, particularly from her nephew Robert Martin Holland. 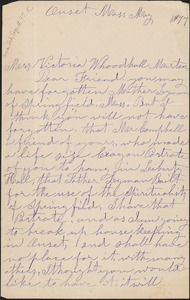 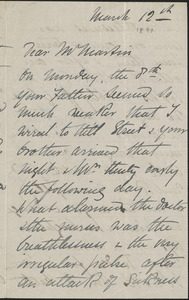 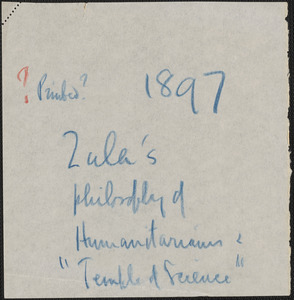 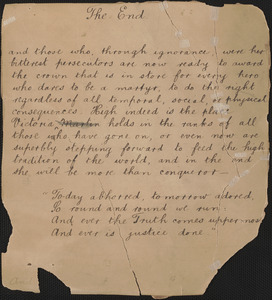