Detail from: A chart of the West Indies from Cape Cod to the River Oronoque
View All Items
or
A significant component of the Norman B. Leventhal Map Center's pre-20th-century cartographic holdings is an extensive collection of nautical charts and atlases pertaining to the world and particularly North America. The core of this collection consists of 25 atlases dating from the 17th and 18th centuries and approximately 1,500 charts, most of which were published during the 19th century. Although the geographic coverage is worldwide, the primary focus is the coastal waters of the United States, especially the northeastern coast. The great majority of these materials are in English. Some of the earliest atlases, however, were published in Latin, Italian, or Dutch, and a few from the 18th century were published in French and German.

Most of the 19th-century charts are the earliest editions of U.S. Coast and Geodetic Survey charts of American waters and U.S. Hydrographic Charts of foreign waters. Their research value is greatly enhanced by the 17th- and 18th- century materials, most of which are very rare. These earlier materials are important because they document the history of nautical charting, as well as the progression of the European and American charting of the North American coasts.

Among the unique items are a manuscript portolan atlas (ca. 1620), which includes two charts of the eastern coast of North America, and Philip Wells' 1688 manuscript chart of Boston Harbor. Some of the very rare items are Robert Dudley's Dell'Arcano del Mar (1646) and four editions of John and William Norman's American Pilot (1784–1816), the first nautical atlas published in the new United States. 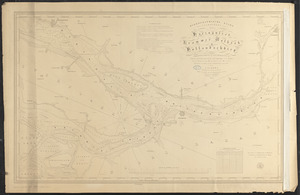