Born in the Parish of Saint Martin, Jersey, Channel Islands, Blampied was inspired to draw by the people, animals, and landscape that he observed. After receiving lessons from a local art teacher, in 1903, Blampied was awarded a scholarship to study at the Lambeth School of Art in London, and then was awarded a London County Council Scholarship, which allowed him to transfer to the London County Council School of Photoengraving and Lithography.

In 1911, Blampied began to develop a career as an independent artist. While continuing to produce paintings and prints, he also received commissions from commercial publishers to produce illustrations, cartoons, and decorative drawings for books and magazines, a creative avenue he continued to explore through the 1930s.

In 1938, Blampied and his wife settled permanently in Jersey. Unable to maintain contact with publishers and art dealers during the German occupation of Jersey from 1940-1945, Blampied used his artistic talents to design currency and postage stamps for the States of Jersey. He returned to painting and printmaking after the liberation of Jersey at the end of World War II.

The American collector Albert H. Wiggin, who donated his collection to Boston Public Library in 1941, established a personal relationship with Blampied. Notably, during the 1930s, Wiggin acquired a number of Blampied’s sketchbooks. Some of the drawings record Blampied’s travels on holiday in Tunisia, the Netherlands, and France, while others are imaginary scenes based on his observations of daily life on Jersey. Also notable, the Wiggin collection includes seven drawings for Blampied’s illustrations to the 1931 edition of Travels with a Donkey in the Cévennes by Robert Louis Stevenson and a copy of the that edition of the book signed and dated by Blampied. Through purchase and gift, Boston Public Library also has been able to acquire a number of Blampied’s prints. 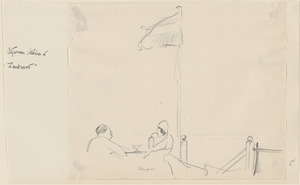 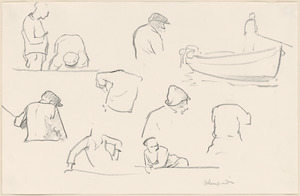 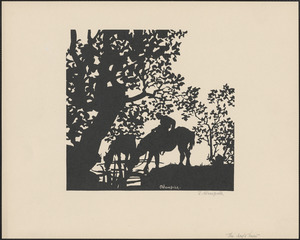 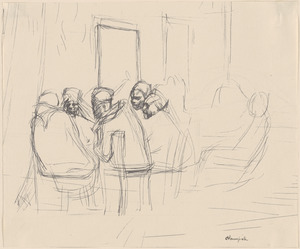