Detail from: Angier, Roswell Parker, 1874-1946 autograph letter signed to Hugo Münsterberg, Athens, 01 April 1904
View All Items
or
Hugo Münsterberg (June 1, 1863-December 16, 1916) was born in Danzing, Germany. He received his Ph.D. in psychology in 1885 and his medical degree in 1887. Münsterberg met William James in 1891 and, in 1892, James invited him to a three-year term in the psychological laboratory at Harvard. Münsterberg returned to Germany for two years, but went back to Harvard in 1897 where he spent his entire career.

The Hugo Münsterberg Collection contains roughly 3,000 letters, invitations, and newspaper clippings that collectively represent Münsterberg's professional network comprised of leading American and German scholars, scientists, businessmen, politicians, writers, and philanthropists. The majority of the collection, which covers the period 1892-1916, is made up of letters between Münsterberg and his colleagues in philosophy and experimental psychology and bear on various facets of academic life including personal debates, intellectual disputes, lecture invitations, and gossip. In addition, there is correspondence with publishers, representatives of professional societies, and independent organizations, as well as correspondence relating to administrative matters at Harvard, where Münsterberg was Director of The Psychological Laboratory and faculty member in the Department of Philosophy and Psychology.

Münsterberg's prominent place in the German-American cultural politics of the period and the impact of World War I on his personal and professional life are also documented. Of additional interest is correspondence related to the organization of the 1904 International Congress of Arts and Sciences in St. Louis, and the founding of the “Amerika-Institut” in Berlin around 1910. Stemming from his interests in applied psychology after 1906, there are numerous exchanges with businessmen from various industries ranging from the electrical utilities and railroad to film. 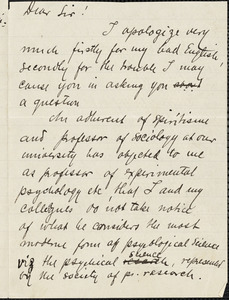