Detail from: Quiz Wives 1st birthday, with Les Smith
View All Items
or
In 1998, Boston Public Library acquired a collection of over 5,000 negatives taken between 1936 and 1948 by photographer Richard Merrill (1908-1997). While attending Northeastern University, Merrill developed an interest in both photography and radio broadcasting. This led to a long career as a commercial photographer, and to a major project documenting Boston-area radio broadcasting during the World War II era.

Working for the Department of Defense, Merrill created an incomparable document of the role that radio played in supporting the war effort on the home front. Highlights of the collection include war bond drives, scrap collection, and national and international celebrities visiting Boston in support of the troops.

In addition to his work documenting the war effort, Merrill also documented events related to the March of Dimes, the Boston Bruins, and many other institutions and organizations. He also frequently contributed photo essays to the Boston Herald-Traveler newspaper on a freelance basis. 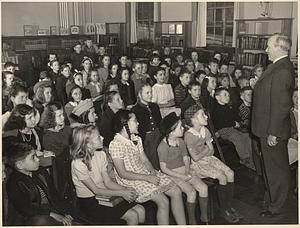