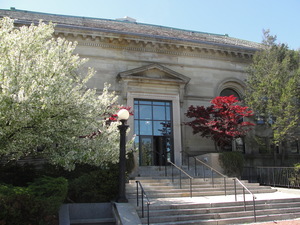 Robbins Library in Arlington, Massachusetts, has its roots in the old West Cambridge Social Library, a private library founded soon after West Cambridge (an earlier name for the town) was incorporated in 1807.

In 1835, Dr. Ebenezer Learned, a physician from Hopkinton, New Hampshire, left $100 in his will to establish a children's library in West Cambridge. According to legend, a collection of books was transported in a wheelbarrow by the newly hired librarian, Mr. Jonathan Dexter, and the first continuously operating Children's Library in the United States was born.
By 1837, Town Meeting had voted an annual appropriation for the library and opened it to all residents. The town changed its name to Arlington in 1867, and by 1872 the library became known as Arlington Public Library.

During the next twenty years, rapid growth forced the library to move to six different locations in Arlington Center. In 1892, a gift of $150,000 from Maria C. Robbins enabled construction of a new building that provided a permanent home -- and new name -- Robbins Library.

Arlington's population had tripled by 1931. The town appropriated $90,000 to construct a wing on the building's southwest side for a Children's Room and public meeting space. In 1951, another construction project began, which saw the addition of two mezzanine levels to the main building. A third floor art gallery rotunda was enclosed, while the public meeting hall was converted into a space for processing library materials (1963).

Further building expansion and renovation became necessary in the 1980s to meet public service needs; but it wasn't until 1992 that construction would actually begin. As a result of this building project, noteworthy Robbins Library improvements now include significant renovations, historic restoration, and a new addition (1994).

We also include photographs from the Arlington Historical Society.

The mission of the Robbins Library is to be a vital community resource, cost-effectively providing residents with a broad range of materials, information, and services to assist them in leading satisfying lives in a complex world.
more...