Detail from: Abijah Buck and Benjamin Spaulding to Leonard Jarvis, 11 March 1789
View All Items
or
Under successive authorizations, the Committee for the Sale of Eastern Lands (1783-1801) and the Land Office were the primary agencies with responsibility for the management and sale of public lands in Maine on behalf of the Commonwealth. During the three-quarters of a century that these functions were served, it was necessary for these agencies to communicate with a wide variety of publics, in and out of Massachusetts, in the prosecution of that business. This is the main correspondence file of the Land Office, and, as such, it incorporates materials generated by its predecessor, the Committee for the Sale of Eastern Lands. The file provides communications on a vast array of subjects pertaining to the business of managing and selling public lands in Maine.

Aside from routine inquiries and administrative business, subjects that typically recur in this correspondence include surveys and explorations, sale and purchase of lands, land prices, timber permits and cutting, trespasses and land disputes, road and bridge construction, soil and topographic descriptions, town boundaries, and bounty lands for Revolutionary War veterans. Inquiries regarding lands for Revolutionary War veterans and their heirs first appear in the early 1820s. Peaking during the end of that decade and the first half of the 1830s, such inquiries continue to be made on an occasional basis into the 1850s. These inquiries are particularly noteworthy inasmuch as they often include details of family history and/or service record in way of demonstrating a claim. Another subject of notable research significance in the correspondence is the dispute between the United States and Great Britain over the eastern boundary. The letters also touch on such topics as the problems surrounding the settlement and development of the Aroostook and Allagash territories. Generally the correspondence offers insights into the political cultures of both Maine and Massachusetts.

The correspondence contains both incoming and outgoing letters. Outgoing correspondence, a minority of the total, consists of convenience copies prepared as the originals were dispatched to correspondents. By far the largest portion of this file is comprised of original correspondence sent to the various agents of the Land Office. From 1820 to 1851, the correspondence represents the work of George W. Coffin, land agent for Massachusetts. As a result of the administrative permutations of the Land Office, hiatuses do occur in the series. Few letters exist for the years 1795-1800, reflecting the quasi-suspension of the Committee for the Sale of Eastern Lands immediately before its dissolution and the establishment of the Land Office in 1801. Gaps also exist for the years 1816 and 1827. See also: Administrative files of the land agent, 1817-1845 ((M-Ar)2026X), subseries (2). 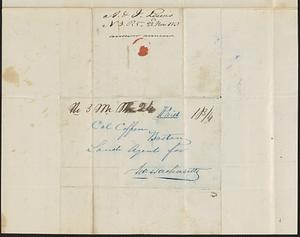