Detail from: Ulmus americana Massachusetts (Framingham)
View All Items
or
Ernest Henry Wilson was one of the foremost plant explorers of the twentieth century. From 1899 to 1922, he conducted many expeditions to eastern Asia and collected plant specimens for Veitch Nurseries and the Arnold Arboretum. He is also recognized as a great photographer. For Wilson's expeditions, Arboretum Director Charles Sprague Sargent provided Wilson with a large format Sanderson whole-plate field camera capable of recording both great detail and broad perspectives without distortion. He returned with hundreds of images which can be viewed on our website.

During the mid-1920s, Wilson began to photograph what he considered to be noteworthy trees in the Boston area, central Massachusetts, the Mohawk Trail, southern New Hampshire, Maine, and Rhode Island. Again making use of his Sanderson camera, he captured nearly one hundred photographs of elms, more than fifty of various oak species, and numerous genera of conifers. These digital images are reproduced from the original glass plate negatives, which though fragile, retain a stunning amount of detail and contrast after nearly a century. Available for the first time, the photographs provide literal snapshots of early 20th century New England landscapes and architecture. 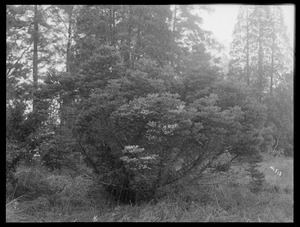